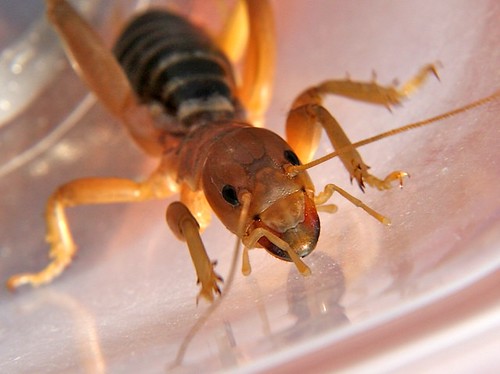 Day 47: Don't Hate Me Because I'm Beautiful, originally uploaded by Here Be Dragons.

Last night, a Jerusalem cricket wandered into our house, so of course I decided to make this interesting insect (who is not really a cricket, nor from Jerusalem) the subject of my Project 365 photo for today.

Also called "potato bugs," these ferocious-looking insects, native to the western United States and Mexico, are actually quite harmless. They are not venomous (although can bite if provoked), and not considered garden pests. Even so, they seem to strike terror into the hearts of just about everyone who sees one. I'll admit that the first time one wandered into my house (which happens three or four times a year), I was a bit nervous. They are large (~2 inches long) and bizarre-looking, but once I'd managed to identify and learn a bit about these oft-maligned creatures, I decided that they're actually sort of cute. Sort of. ;)

After taking some pictures, I released it into my garden, where it immediately burrowed under the dirt (trying to get away from the monstrous creature which had been carrying it around, no doubt).

A few more photos can be found in this Flickr photoset. 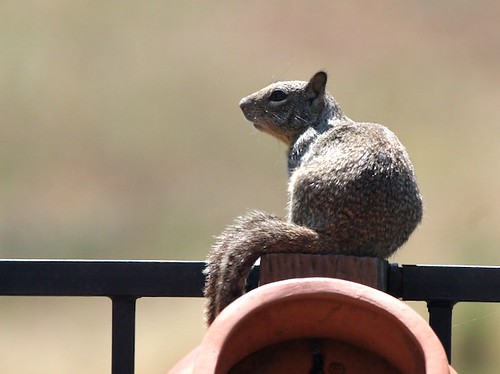 In an attempt to up my "cute quotient" after posting the Jerusalem cricket photos this morning, I make this offering: California ground squirrel. This one is still sitting up on my back fence as I write this, in fact, looking as cute as ever. A few minutes ago, s/he was making a chirping noise that I would have attributed to a California towhee (a type of large sparrow) if I hadn't seen the squirrel actually making the sound. 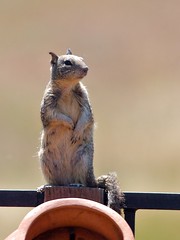 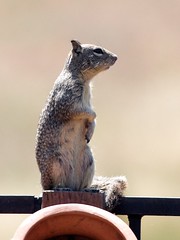 And now for something completely different . . . C and I are off to the movies, to see "Iron Man" again. :) (Assuming the theater can get the film to play today).